Beyoncé Takes Us Behind The Scenes Of Her VMA Perfromance [VIDEO] 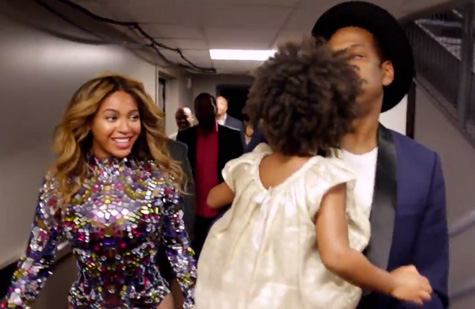 It takes a village. A day after celebrating her 33rd birthday, Beyoncé shares some behind-the-scenes footage from her epic MTV Video Music Awards performance. From the choreography to the stage design, we get a first-hand look at all the hard work and team effort that went into putting together the 15-minute medley.

During rehearsals, Bey expresses her frustration about not getting to run through the performance enough times and demands that her dancers paint their bodies white. Shortly before hitting the stage, we see her holding hands with her crew and leading them in a prayer circle.

“God, we imagined being little kids dreaming of this night and we are here,” she says.

After killing her performance and accepting the Video Vanguard Award, she goes backstage and toasts with Jay Z and her team, but it’s Blue Ivy who gives her the best feedback. “Everybody say good job,” says her two-year-old daughter.

Go behind the scenes of the BeyMAs.