With those words, Young Thug introduces himself to France in a sprawling conversation with the French interview series Clique. The conversation starts off with the “Pacifier” rapper asking how to say

“Suck my dick” in French and explaining why he’s so controversial. “There has got to be a bad guy for everybody to blame. If not, who they gone blame, the good guy?”

He also goes into detail about his writing process.

“I don’t write,” he explains. “You won’t ever see a Young Thug paper with no songs on it.”

“You heard they found another Earth?” He asks the interviewer, before diving into his extraterrestrial roots. “It’s the same as Earth but 10 times bigger. I’m probably from there.”

Thug describes his relationship with Kanye West, who he claims compared him to Bob Marley. He says that he and Kanye are “identical,” adding,

“I don’t compare myself to nobody but he do the same thing. It’s a rhythm, a special sauce you can’t give away.”

“I don’t know what the f**k they thinking…letting him be president,” says Thug when asked about Donald Trump. “Maybe my self-esteem need to be up there like him, like, ‘I’m the fu**ing president.’”

Thug continues with astute political observation when he’s asked for his views on the American prison system. Noting that his brother is in prison, he says that sentences should be lowered dramatically.

“What the f**k they talkin’ about, locking people up for 50 years? They should lock them up for five years,” he says, adding, “Let everybody out of prison.”

The 24-year-old also reveals that he is a father to six kids, and had his first at 14.

Watch the full interview below.

Nicki Minaj Hints at a Will.I.Am Collaboration On Her Debut Album 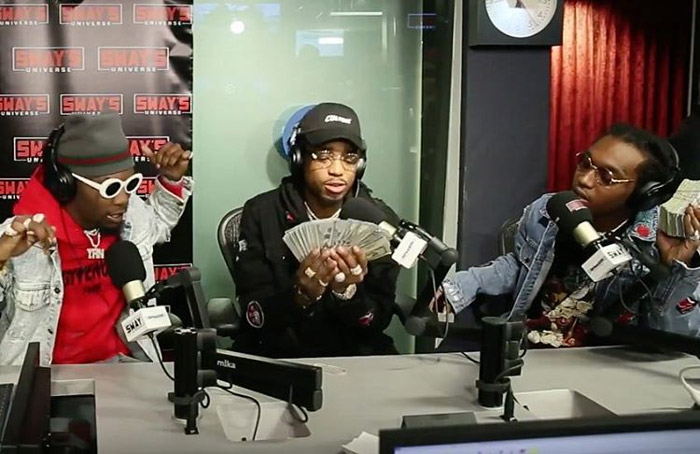 Migos Freestyle on “Sway in the Morning” [VIDEO]