Bryant entered the NBA right out of high school and helped lead the Los Angeles Lakers to three championships from 2000 to 2002 and another in 2009.
In 2003, his squeaky-clean image was muddied when a Colorado hotel employee accused him of sexual assault. Bryant tearfully admitted to the affair, but insisted the sex was consensual. The case was eventually dismissed after the woman refused to cooperate with authorities.

Tiger Woods, the first billionaire athlete, had a single-vehicle accident in the early hours of Saturday morning, smashing his Escalade SUV into a fire hydrant and tree. Since the collision, Woods has avoided three meetings with the local Florida police to discuss the incident and asked that this all remain private—to which the media has unanimously replied “No.”
The National Enquirer wrote a piece one week ago concerning Tiger’s possible extramarital affair with a sexy night club hostess. It is now believed that the scratches on Tiger’s face, which he claims were caused by the impact, are from his enraged wife.

The 11-time Grand Slam singles champion flipped out on a US Open line judge in September and was handed the largest fine ever yesterday: $82,500. Williams verbally lashed out after a foot-fault call at the end of her semifinal loss to Kim Clijsters. She threatened the lineswoman, saying, “I’m going to shove this ball down your f—-ing throat.”

Shaq, the most effective big man in the NBA today, and his wife Shaunie O’Neal legally separated a month ago after almost seven years of marriage. According to Los Angeles Superior Court documents and numerous reports, Shaunie sites irreconcilable differences for their breakup and is seeking sole custody of their four children with visitation rights for Shaquille. The divorce process could get messy if history is any clue. The couple separated in 2007 and Shaunie accused Shaq, through the media, of hiding money from her.

Shaq now plays with LeBron James on the Cleveland Cavaliers.

Back in 2007, former Atlanta Falcons star Vick admitted to hanging, drowning and suffocating dogs that didn’t perform well in fights he backed. In July, Vick was released from federal prison after serving 18 months for his role in a brutal dog fighting ring. He is now the quarterback for the Philadelphia Eagles, but tours the country with lecturing against animal cruelty.

The track & field star won three gold and two bronze medals at the 2000 Summer Olympics, and was once the world’s top female track star. Though she denied ever using performance-enhancing drugs for years, in 2007 she finally admitted to lying to a grand jury about her steroid use and pleaded guilty to perjury. She served six months in jail and relinquished her medals.

Pacman enjoyed two breakout years with the Tennessee Titans before joining the Dallas Cowboys. Yet, even before entering the NFL, Jones had a penchant for trouble. While at West Virginia University, he was sentenced to a year in jail following a bar fight. Once in the league his hot temper earned him more legal woes, such as drunken fist fights, altercations with women, etc. The tops was a 2007 night club incident in Vegas where he beat up a stripper for touching his money.

A first-round draft pick in 1997 to the Carolina Panthers, Carruth was expected to do big things in the NFL. On November 16, 1999, Carruth’s pregnant girlfriend, Cherica Adams, 24, was shot several times as she sat in her parked car. Doctors managed to save the baby, but Adams died a week later. Police later found Carruth hiding in the trunk of a car in Tennessee. He’s serving more than 18 years for conspiring to murder Adams. Prosecutors argued he didn’t want to pay child support and hired a gunman to kill his girlfriend.

Tyson became the heavyweight champion of the world at age 20, making him a household name seemingly overnight.
Yet once his manager and mentor Cus D’Amato died, Tyson’s life seemed to spiral. There was a rape conviction; allegations of abuse by actress Robin Givens; the time he bit off a chunk of Evander Holyfield’s ear in a bout; cocaine possession; leading up to his recent assault on a tabloid photographer in LAX a few weeks back. 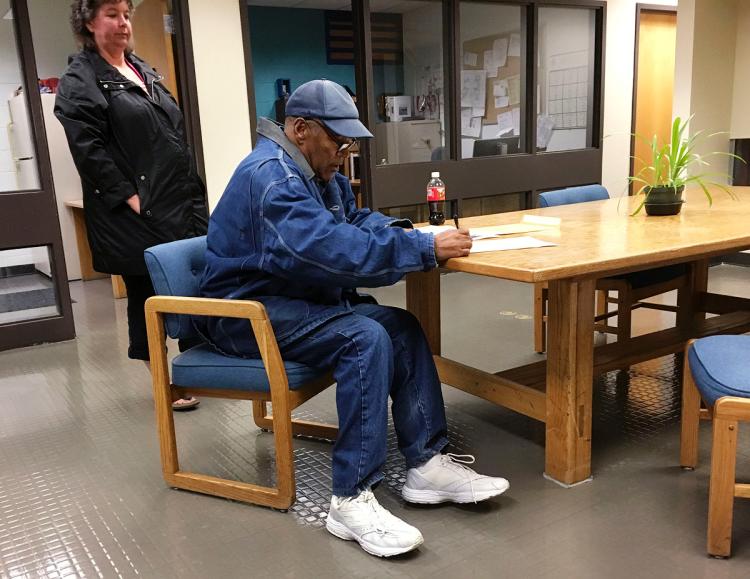 After 9 Years, O.J. Simpson is Released From Prison; Makes His First Statement [VIDEO]