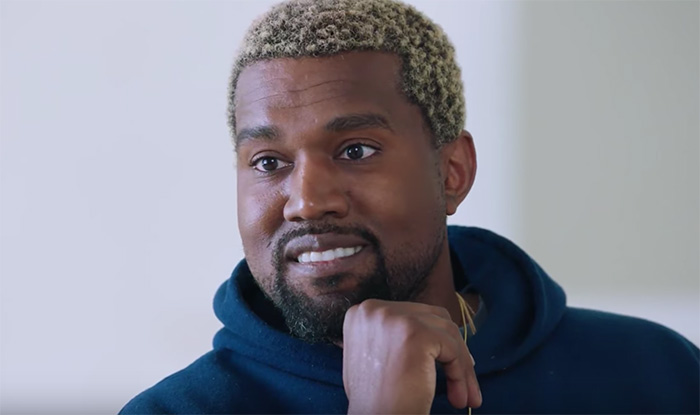 Kanye West doesn’t do too many interviews these days. But in the midst of his controversial Twitter love for President Trump, Yeezy sat down with media personality Charlamagne Tha God for an in-depth nearly two-hour interview.

The free-flowing conversation, airing exclusively via YouTube, took place at Kanye’s Calabasas home. It begins inside of the crib and ends outside, overlooking the sunset over local mountains. Throughout the interview, West opens up about everything from his JAY-Z feud and reconciliation to his love for Trump and criticism of President Barack Obama.

Although voicing disappointment with the fact that Hov and Beyoncé missed his wedding with Kim Kardashian,

‘Ye said he was on good terms with his “Big Brother.” “We good,” he added. “We texting each other. It’s positive energy. I haven’t seen him but I can feel him.”

He went on to compare his affection for Trump with a “Chappelle’s Show” skit.

“When I expressed what I felt [about Trump], it was almost like a Clayton Bixby moment,” he said. “Everybody’s head exploded.” However, he went on to say that he doesn’t regret it. “I would meet with him today and I would talk about Chicago first,” he said. “We would talk about some more things and eventually get into a lot of other elements but we’ll start there.”

Watch the interview and read additional quotes from the lengthy conversation below.

ON KIM KARDASHIAN’S ROBBERY: “The situation with my wife in Paris and all of the elements of feeling helpless, feeling like what could you do? I went to Paris on that trip to protect her, not protect her physically, but to go and just help her with her looks… One of the things she said she heard was that they were coming to rob her and they had to wait until I had left. The people had been strategizing and scheming on that for a long time.”

ON JAY-Z: “The concept that he gave me the money frustrated me. The money, he got from Live Nation. Roc Nation was managing me at the time. That’s something normal, that someone would give someone a touring deal. The fact that it was worded that it came from him — I’m a loyal and emotional artist person. That made me feel like I owed more than just the money itself, the fact that it came from him. It put me under a bit more of a controlled situation. I’m only acting out of love. I don’t need to be controlled. I just need to be inspired and informed…I think there was some love in that on Jay’s part, because he did have to co-sign for it when the Live Nations and these different companies wouldn’t co-sign for me. I was in debt and JAY did have to go up and say, ‘I’ma co-sign for Ye.’”

ON JAY-Z & BEYONCÉ: “I was hurt about them not coming to the wedding. I understand they was going through some things, but if it’s family, you not gonna miss a wedding. I’m not using this interview to put any negative things but I gotta state my truth.”

ON CONFIDENCE: “One of the things that was incredible when I got out of the hospital was I had lost my confidence. You could see it. That’s why they were saying sunken place and all this stuff. Wow. I never had the empathy for people who lacked confidence. I had so much of it, I didn’t know what it was like to be without it.”

ON PRESIDENT OBAMA: “I felt a little way about Obama. I’m your favorite artist. You play ‘Touch the Sky’ at your inauguration, and now all of a sudden, Kendrick and JAY and all the people you invite to the White House, now these your favorite rappers. I ain’t got no problem with these rappers, but you know I’m your favorite…but I’m not safe.”

ON OBAMA & CHICAGO: “Obama’s from Chicago and Chicago’s the murder capital of the world. Just like how there’s racist Trump supporters, there’s things where I’m like, ‘Maybe this could make a difference.’”

ON MUSIC & ART: “My mama made me to never be manipulated and gangster’d and pimped. Somehow, stepping into the music industry, it happened. The music industry is set up for you to have just enough money to afford a car, pay for your kids, a house, and be on tour for the rest of your life, until you die. It ain’t set up for you to literally go buy an island like Phil Knight. It ain’t set up for the artist to win. It’s like boxing. More people end up retarded than rich.”

ON SCOOTER BRAUN: “Where you really have to give him his props, is his parents adopted a black child. His brother’s black. This is a Jewish guy who understands business but also understands how to communicate on a personal level with a black person, on a brother level. Me and Scooter would just get on the phone and he would talk to me for hours. He was Kanye West’s gateway drug to business.”

ON TRUMP LOVE: “I love real change. I love challenging the norm. I love people who don’t love him. I love the fact that they speaking up and everybody just giving their opinions. Everybody’s expressing themselves. I love that. I’ve been waiting for this moment in time. This is a ‘Ye moment in time.”

ON TRUMP’S POLICIES: “I don’t have all the answers a celebrity is supposed to have. I can tell you when he was running, I felt something. The fact that he won proves something. It proves that anything is possible in America, that Donald Trump could be president of America. I’m not talking about what he’s done since he’s been in office, but the fact that he was able to do it.”

ON HIS HOSPITALIZATION: “When I hit that hospital, that was a bird flying into the window. I could have not made it out of it, but I survived…I’m happy it happened. I’m happy I went to the other side and back. The moment you’re in the hospital bed and you’re next to your friend and you tell them, ‘Don’t let this person leave my side,’ and they put you inside of an elevator and take all your friends away from you, that was the scariest moment of my life. I thought I was gonna get killed. My wife wasn’t in town.”

ON MEDICATION: “It’s an imperfect solution to calm me down. But there’s a lot of ways to calm down. Let ‘Ye be ‘Ye! There’s power in being controlled and calm. An X-Men really understanding how to use his power, or Super Man. That’s me. Once the Kryptonite is gone, I got the confidence, everything is possible. Building acres, raps, stadium tours, designs, companies, ideas to ignite the next generations. I’m just a vessel and that’s my job in the universe. As a servant to the world, I have to be me. I’m not as good of a servant if I’m not ‘Ye.”

Kanye West and Kim Kardashian Set To Get Married May 24th in Florence, Italy