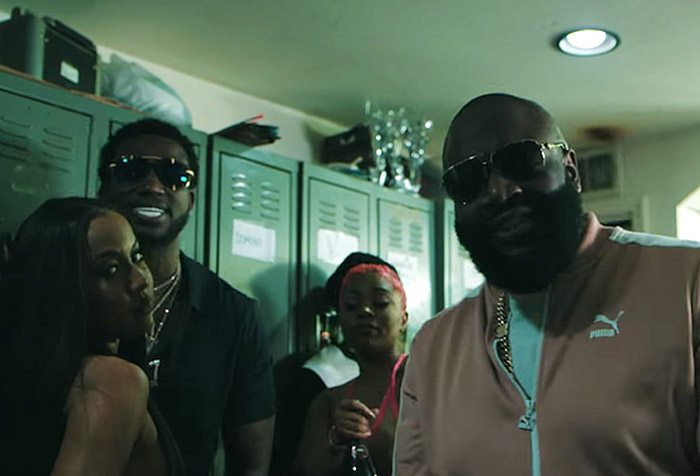 Before they begin working on their upcoming indie film, Rick Ross and Gucci Mane head to the strip club in the video for “She on My Dick.”

The not-safe-for-work visual starts inside of a strip club locker room, where dancers are getting ready for work. Soon, a manager barges in and demands that they listen to his instructions.

“We got a motherfuckin’ red alert in this bitch,” he says. “We got Rick Rozay, we got Young Dolph, we got motherfuckin’ Guwop. Y’all ready to get this money? I need all hands on deck.”

One of the dancers immediately starts screaming.

“Oh my God,” she says. “Rick Ross? I’m scared.” The manager seems unfazed. “Get your ass up there and go get Rick Ross,” he says. “Rub that ni**a beard. Get up there now, Goddamnit.”

Aside from Renzel, Wop, and Dolph, the video also features cameos from DJ Khaled and a bevy of beauties, stripping amid $1 bill showers.

“She on My Dick” is a single off Rozay’s recently-released album Rather You Than Me, which is currently at No. 16 on the Billboard 200. The video arrives shortly after he announced his next album, Port of Miami 2: Born to Kill, the sequel to his major label debut.

Head to the strip joint with Rozay, Guwop, and friends below.