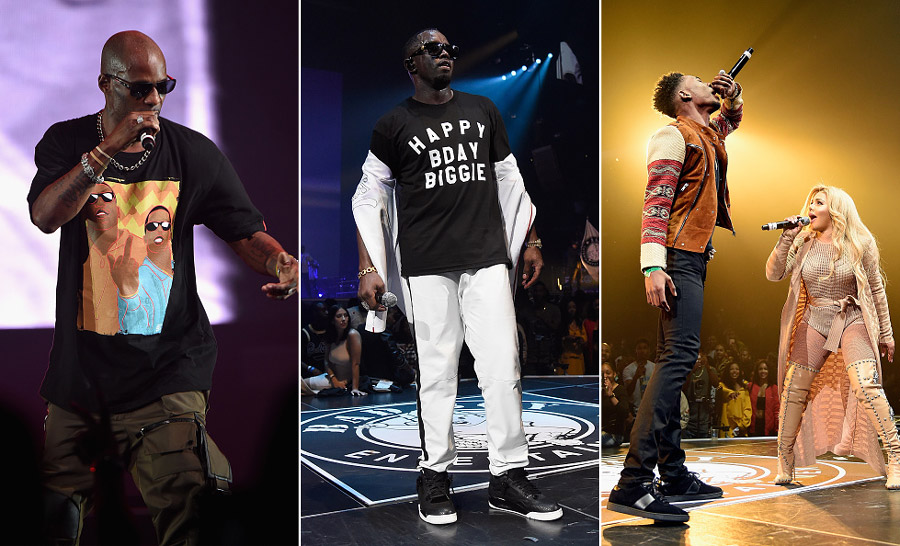 Encore. Puff Daddy & The Family were back for the second of two sold-out shows at Barclays Center on Saturday (May 21). After kicking off their “Bad Boy Family Reunion Tour” on Friday with Jay Z, Nas, Usher, and Mary J. Blige, Night 2 in Brooklyn had some surprises of its own.

Perhaps the biggest surprise was DMX, who came to perform with his longtime producer Swizz Beatz. Together, they ran through classic Dark Man cuts, including “Ruff Ryders Anthem,” “Party Up,” and “What These Bitches Want.”

Given that Saturday’s concert was held on Notorious B.I.G.’s birthday, DMX paid homage to the late hip-hop icon.

The night continued with even more unexpected stars, including Desiigner, who dabbed his way through “Panda” next to Lil’ Kim, and Fabolous, who turned the situation into a “Lituation.”

Another major surprise came from Shyne. The rapper, once criticized for sounding a lot like Biggie, delivered a video message live from Belize. “Happy birthday to the greatest rappers of all time,” he said. “Notorious B.I.G.” Then, he launched into his “Bad Boyz” smash as Diddy looked on.

Much of Night 2 also mirrored Night 1, with Bad Boy’s past and present coming together for a hit-fueled evening. Ma$e, Faith Evans, 112, French Montana, The LOX, and the Queen Bee were all among the performers who showed why Puff’s imprint continues to symbolize greatness within rap. More performances from opening night can be found here.

True to Bad Boy’s motto, The Family can’t stop, won’t stop there. Instead, Puff and his crew are taking this show on the road with a 25-date “Bad Boy Family Reunion Tour,” launching Aug. 25 in Columbus, Ohio. From there, the team will hit several cities in North America before finishing things off in Oakland, Calif. on Oct. 8.

T.I. Says Yo Gotti Is Officially In Hustle Gang; Maino & Uncle Murda Could Be Next [VIDEO]