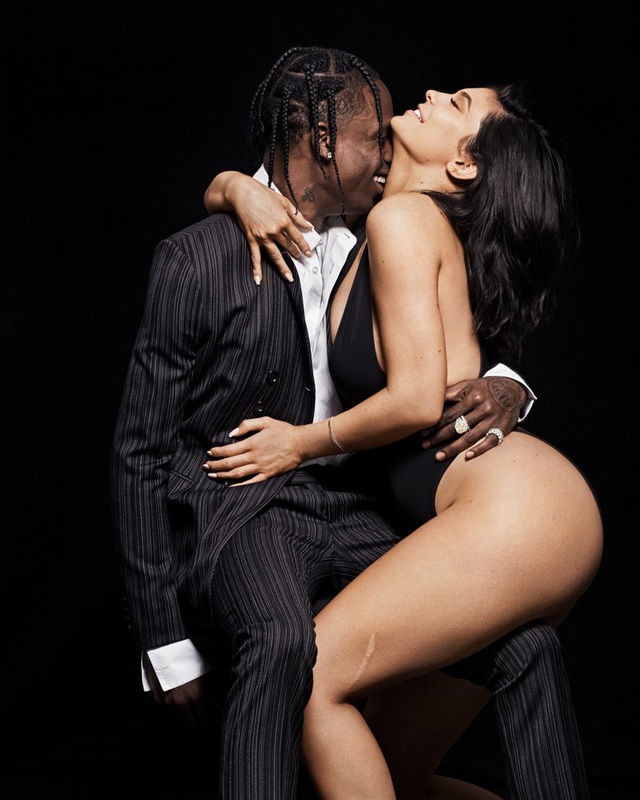 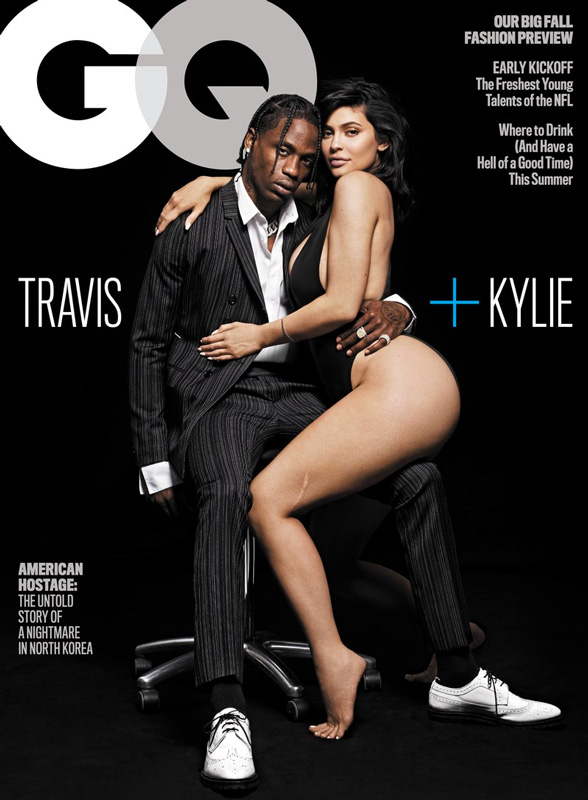 Travis Scott and Kylie Jenner celebrate love on their first magazine cover together.

The rapper and billion-dollar beauty mogul open up about their relationship in the August issue of GQ, photographed by Paola Kudacki.

The power couple, who welcomed daughter Stormi Webster earlier this year, recalls meeting for the first time at Coachella before falling in love.

“Coachella was one of the stops on his tour,” says Kylie. “So he said, ‘I’m going back on tour—what do we want to do about this?’ Because we obviously liked each other. And I was like, ‘I guess I’m going with you.’”

(“I wouldn’t have worn snapbacks”) and admits that he doesn’t like photo shoots (“I’m impatient as a motherfucker”), while Kylie addresses the tabloids and the most romantic thing Travis has done for her.

The article mentions that Travis recorded a verse for Kanye West and Kid Cudi’s joint album Kids See Ghosts, but it never made the cut. Now he’s readying his own album AstroWorld.

“I’m just anxious to drop my baby,” he says of the project, which he named after the now defunct Six Flags amusement in Houston. “It touches home base.”

Travis also takes the “Kylie Quiz,” where he is asked 23 questions about his girlfriend, their daughter Stormi, and the Jenner-Kardashian clan.

KYLIE ON GOING ON TOUR WITH TRAVIS: “My whole family knows that I do whatever I’m going to do. I’ve been that way my whole life. I don’t really answer to anybody. I live on my own, and so I just rode off into the sunset. We had a lot of downtime. It was organic. And we would just go to these random cities. We got to not be who we really were. Like, if we were in L.A., I feel like it would’ve been way different. Everything happened for a reason. We weren’t going out as ‘Kylie and Trav.’ We would just be in Cleveland, walking the street for hours. We would go on walks, and no one would bother us.”

TRAVIS ON HIS BIGGEST REGRET: “I wouldn’t have worn snapbacks. … And also I would’ve definitely hid—hard—until my hair grew out, bro. I hate when people randomly take pictures of me. I’d look crazy as fuck in them. No lineup, no nothing.”

TRAVIS ON THE ‘KARDASHIAN CURSE’: “I don’t even be looking at motherfuckers. I don’t be looking at shit. Kylie actually likes me for me.”

TRAVIS ON THE LAST TIME HE CRIED: “When my daughter was born. As soon as I heard her crying…”

KYLIE ON TRAVIS DEALING WITH THE FAME: “I don’t think he’s really cool with it, but he deals with it, because we love each other and we have a family. For sure, I know he doesn’t like the attention. That’s why we just go the extra mile to keep our relationship super private, or like, if he has events or something, I won’t come. Because I want him to do his own thing. I want him to be him. I don’t want it to be Kylie and Trav. If people don’t ever see us together, that’s okay with me, because we just do our thing.”

KYLIE ON THE MOST ROMANTIC THING TRAVIS HAS DONE FOR HER: “When I landed in Houston to make up, he—I always kept saying I really want a Stormi chain, so when I landed, he had one made for me. But probably the most romantic thing he’s done for me is, on my birthday, he woke me up out of bed at like six in the morning. He was like, ‘We gotta go,’ and I’m just like half asleep, like, ‘What do you mean? What do you mean?’ And he just starts pulling me, and the sun was just coming up, and he had flowers all the way down his house and violin players everywhere.”